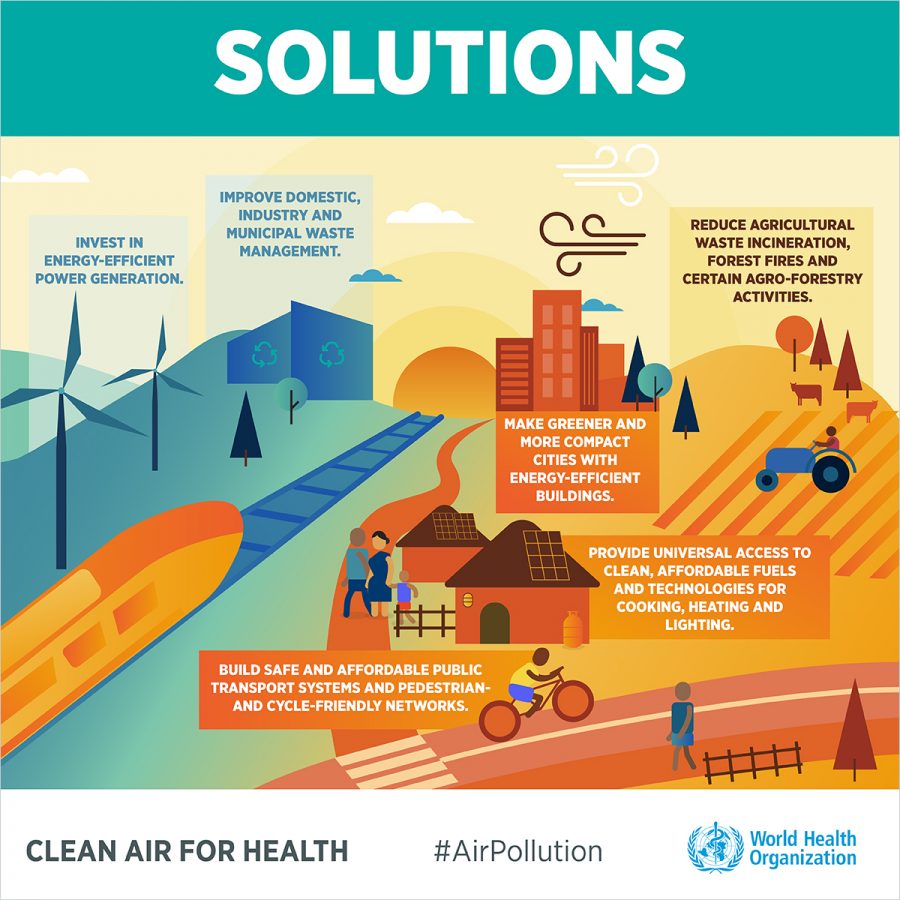 Air pollution has significantly decreased since the beginning of the pandemic due to changes in human behavior incited by COVID-19.

Air pollution is the spread of an unnatural quantity of gases into the Earth’s atmosphere. Exposure of car emissions and the use of energy throughout urbanized factories are the current leading cause of air pollution.

About 70 percent of greenhouse gas emissions come from 100 main corporations. The commerce industry is beginning to care more about profit than the long-term safety of humans.

Mr. Coonfare, a chemistry teacher who has worked with NASA, explains who plays the most crucial role in the solution, “The corporations have the largest impact on climate damage. All countries in the world need to have a plan for reducing emissions. Once that is achieved, the climate will start to see much improvement.”

Additionally, travel has been put to a halt as a result of the closure of international borders ordered by many countries globally. Gases such as carbon emissions released through the use of motor vehicles and airplanes have heavily declined since the start of the pandemic.

The University of Washington News reported that researchers have proven NO2 levels in highly populated cities such as Seattle, Los Angeles and New York City have decreased due to the mandated quarantine of many cities. This is mainly due to the mass decrease in transportation needs throughout the workforce.

Without people traveling to their workplaces using motor vehicles or airplanes for those involved in international work, fossil fuel emissions are reduced.

Additionally, a vast number of factories and work offices have been shut down due to the quarantine of workers and students. In hopes of preventing financial instability, people who have been pushed out of their jobs have moved to online alternatives to maintain their weekly paychecks. Many companies are also beginning to shut down office buildings with no intention of reopening.

Corporations have found that it is more cost-efficient to have workers online at home. This sets a precedent for future companies on how to increase efficiency and reduce the spread of COVID-19 or any risk factors that could potentially arise in the future and cause disruption within companies.

Many citizens of these highly populated cities have also progressed to a more reusable household. People have begun using reusable grocery bags, cups and straws for a more earth-friendly alternative.

However, The National Geographic explains how the sudden drop in emissions and lifestyle changes may result in air pollution rates increasing faster than before,“Now, some experts fear that the world risks a future with more traffic, more pollution, and climate change that worsens faster than ever.” People are preferring individual travel rather than mass transportation means such as trains, increasing the emissions coming from vehicles.

Unfortunately, the environmental effects of COVID-19 are short-term and once lifestyle regulations and quarantine mandates are lifted, the environment will return to the horrid state it was in. Times Square in New York recently put up a countdown which displays about seven years and 100 days until the effects of climate change are irreversible. The clock is ticking and now is the time to begin demanding change.