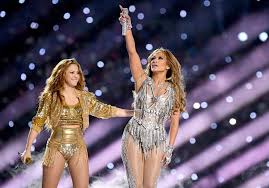 The Super Bowl is the one day when all football fans join together to watch the most famous game of the year. Not all viewers are football fans cheering on their favorite teams, however.

Many people tune in to watch the new commercials and some watch for the unforgettable performances during the National Anthem and Halftime Show.

Popstar Demi Lovato then started singing “The Star-Spangled Banner”. To sum up the public’s reviews, Lovato killed her performance with her emotional sounding vocals. Users all over social media are commenting on how well she sang this year.

This year’s halftime show was also one to remember. Columbian singer Shakira kicked off the show with her song “She Wolf’ dancing alongside her backup dancers, then transitioning to playing “Empire” while playing guitar.

She then tied herself to a large rope before singing “Whenever Wherever” to then start singing Cardi B’s “I like it” with Bad Bunny, finally ending off shaking her body to “Hips Don’t Lie”.

Jennifer Lopez then entered the stage on a pole, roaring her song “Jenny from the Block” right before male dancers joined her for “Get Right”. She then got back on said pole for “Hustlers” and after some green lasers, she launched into “Waiting for Tonight”.

This was followed by a dance to “Booty” and “Love Don’t Cost a Thing” with her coming back on the mic for “On the Floor”. Then followed it with her daughter Emme Lopez singing “Let’s Get Loud” alongside other young singers and Shakira on the drums.

Shakira and Lopez then joined together for a final dance to end the halftime show, hugging and having fun.

Viewers all around the country are loving this year’s Super Bowl performances for many reasons such as women empowerment, amazing vocals, dances, costumes, and transitions throughout the national anthem and halftime show.